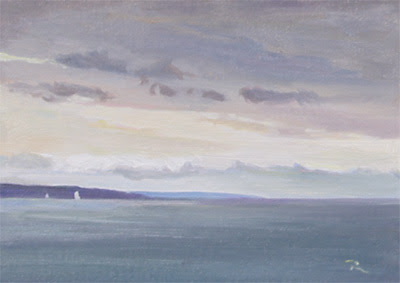 "...with the radiant summer light of Provincetown that rivals the Greek Islands, because, I have always supposed, like them. . . . Provincetown is on a narrow spit of land surrounded by the sea, which reflects light with a diffused brilliance that is subtly but crucially different from the dry, inland light . . . People tend to forget that Provincetown is (roughly) on the forty two degree meridian, as is Barcelona and Opporto and Cannes and Rome (almost exactly) and Macedonia and Istanbul and Peking (more or less), a distinctly warm southern light compared to Northern Europe, a light as seductive to painters in the Modernist tradition as geometry was to ancient Greek philosophers and musicians." -Robert Motherwell

The Artist's Conundrum: an Oil Painter's Journal Rugh's painting journal includes entries from 2006-2010 and includes work from that period.

"Capturing Character in the Oil Portrait Sketch" A 45 minute oil painting demonstration in which Doug Rugh paints a two-session portrait likeness of his artist wife Hillary Osborn. The video covers working from life with models, lighting, brushes, oil paint, proportions and capturing a likeness. The artist discusses his method in the fast-motion film.